Rules of Divorce by Kids 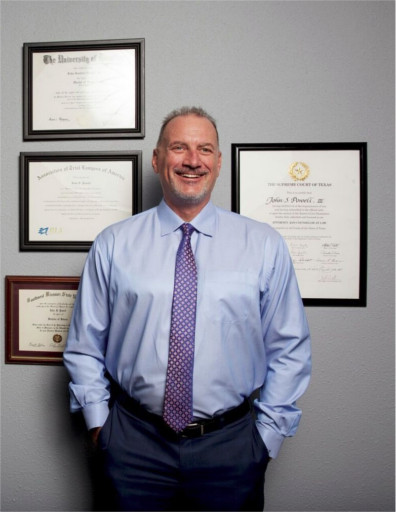 John Powell, III graduated from the University of Tulsa College of Law in 1997. Being sworn in as a member of the State Bar of Texas in 1998, he joined his father's law firm - opting for private practice with family over employment with a large firm. A catastrophic battle with meningitis involving weeks of hospitalization in 1999 sidelined him at the outset of his career for about a year, leaving him legally-blind. In 2001, he returned to his advanced legal education in the post-doctoral Master of Laws & Letters (LL.M.) program in Health Law at the University of Houston Law Center. Since 1998, John has practiced and lived in Pearland, Brazoria County, Texas with his wife and daughter.

John's practice rests primarily in Family Law, where he has represented persons in literally hundreds of divorces, child custody and support modifications, as well as adoptions, terminations, and paternity cases across the State of Texas. Since 2013, John has been Board Certified in Family Law by the Texas Board of Legal Specialization, qualifying himself to represent himself as an expert in the field.

John is fluent in the areas involved in small business representation. His small business clients have taken advantage of his skills as both a corporate structure planner and organizer, as well as strategic analyst for the legal aspects of their businesses. Of course, he has also handled many business vs. business cases, such as matters of payment or delivery of products and/or goods.


A skilled mediator, as recognized in 2022 by his being designated a Distinguished Credentialed Mediator, John takes advantage of the experience gained in the litigation process of his own cases to assist other lawyers and the parties they represent to resolve their conflicts amicably, and with less expense, and perhaps most importantly, in less time, than would be the case down at the courthouse. John prides himself on trying at all times to find solutions to legal problems as soon as possible and at the least expense to the client.

Professional Associations and Memberships, past and present